Did China learn anything from Japan's lost decades?

The economic models of China and Japan are closely related. However, China has the opportunity to learn from its neighbour's mistakes and protect property and banking investors.

In my formative years as an analyst in Hong Kong, I was assigned coverage of the regional banking sector. I got a chance to speak with some of the best sell-side bank analysts, macroeconomists and strategists. Through the years, that education remains an integral part of my learning around markets.

The sophistication of capital markets varies across countries. Over time, as economies have developed and the world globalised, certain aspects of markets converged. Yet, differences in cultural mores, historical practices, political ideologies and technology adoption, mean those nuances and differences persist. In Asia, banks still dominate the provision of credit as opposed to capital markets.

Japan, South Korea, Taiwan, China and Singapore are somewhat similar in their construct of top-down models of economic development. Their banking systems were (and in some countries continue to be) instruments of state directed policy. Perhaps the common thread is that Japan invaded and ruled all or some parts of those other countries and left behind business practices that are now embedded in their systems.

Alternatively, Japan’s Post-War economic miracle became a role model for the others to adopt. Planning, robust control by bureaucrats and state-directed lending by financial institutions were the core elements. Industries were built from scratch with an express goal of providing employment and gaining market share, many times without reference either to the merits of the project or long-term competitive advantages. How else, would energy-deficient China become the world’s largest producer of aluminium? ‘Build and they will come’ was the driving mantra, not profits or returns on capital.

An integral part of the East Asian development story was property price appreciation. In almost every Asian country with relatively rudimentary capital markets, property remains a disproportionately high-value asset for households. Moreover, investment in a ‘real asset’ was a good hedge against inflation. Some countries, such as Singapore, developed policies to provide low-cost public housing, but others like Hong Kong were laissez-faire. Japan was the first extreme case in property speculation. In my opinion, the Plaza Accord of 1984 which substantially weakened the US dollar, was partly responsible for the influx of capital into Japan. Those bubble years from 1985 until 1991 witnessed a rapid rise in the price of land in Japan. When the bubble burst, deflation ensued, and property values kept falling. 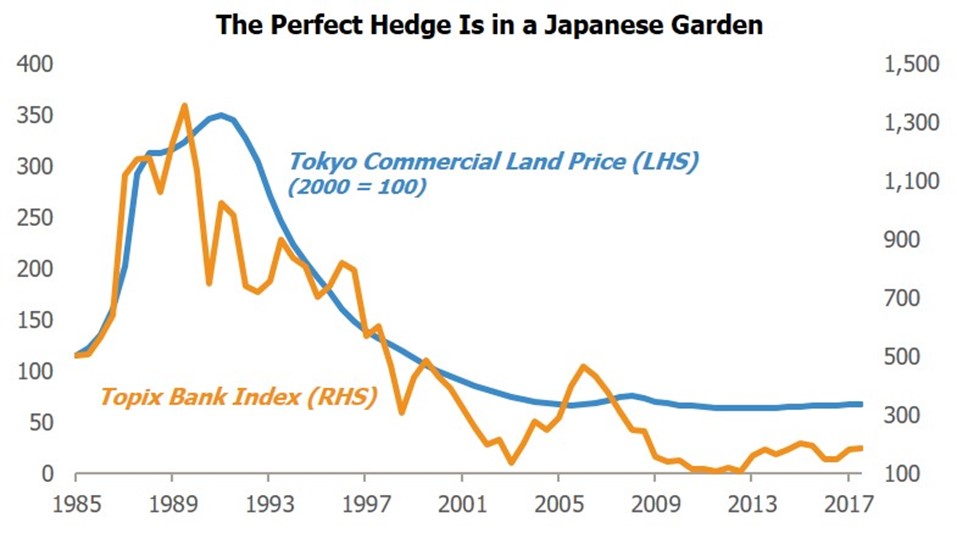 Banks in Japan were reluctant to recognise non-performing loans and preferred to hope for a revival of collateral values. As deflation took hold, policy rates in Japan drifted close to zero, further reducing incentives for banks to force struggling borrowers to sell or restructure. Their carrying cost of loans was minuscule (funding costs for banks averaged 0.25% per annum). Their loan-to-value ratios remained high, which crimped their ability to make fresh loans to better prospects. Meanwhile, borrowers became ‘zombie’ companies and kept sucking in credit to maintain loss-making businesses. As an aside, the Japanese government enacted stimulus measures that provided cyclical upside to the economy and excited bank stocks for a brief period. The lost three decades in Japan were brutal for investors in property and banking stocks.

This detour into the history of Japan is relevant and instructive. It informs us about potential scenarios of economic paths in China. Nothing is certain; observing the turmoil in the Chinese property sector is somewhat reminiscent of Japan, yet circumstances are different.

In 2020 and 2021, China’s handling of COVID was considered a success. The economy remained open, factories and supply chains (for the most part) supplied goods demanded by the rest of the world. Stimulus cheques in the US, trillions of dollars in quantitative easing and booming asset markets fuelled goods demand, which China catered to.

From late 2020, China enforced an ideologically driven crackdown on private firms in technology, education and media. Xi Jinping, the President of China, never a fan of property speculation, forced property developers to deleverage (three red lines policy). By late 2021, the Chinese economy started slowing well before the rest of the world. A reckoning with too much debt in the Chinese system, especially for over-extended property developers, was a long time coming. 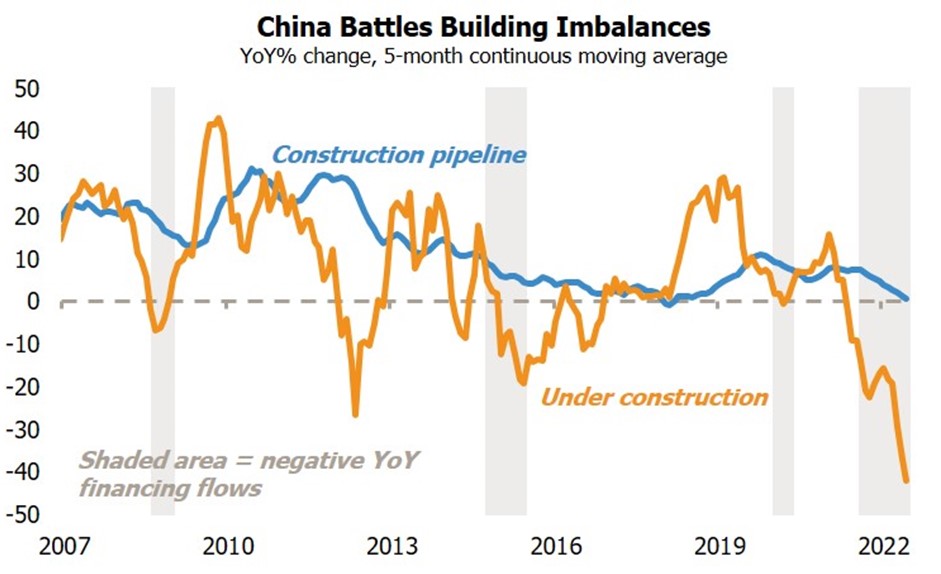 Maintaining a zero COVID policy in 2022 exacerbated this slowdown. Most observers believe this policy is plain wrong; ideology trumps practicality. These lockdowns in different parts of the country in succession with a stop-start path led to severe strains on businesses and individuals. With property projects stalled, many individuals across China have stopped paying for their mortgages. More than anything else, a change in sentiment and confidence in the property market could mean an extended period of falling demand accompanied by lower property prices. Unemployment has risen, especially amongst the youth, which is now at all-time highs.

In such a situation, developers could cut prices to raise cash, thereby further exacerbating the downturn. Alternatively, banks and state-owned institutions will be forced into national service by bailing out developers. Since maintaining social stability is a national priority, the government most likely will follow the example of Japan. Banks and state-owned developers step in to prevent a downward spiral; yet lay the groundwork for a grinding deflationary outcome.

If this scenario does pan out, learning from Japan’s economic experience over the past three decades can be instructive. Corporates and individuals gradually become risk averse and focus on capital preservation. As growth disappoints, government periodically tries to stimulate the economy. Sometimes that coincides with a global cyclical recovery and generates hope of escaping deflation. Yet deflationary conditions persist.

Richard Koo, (Chief Economist Nomura Research Institute) known for coining the phrase ‘the balance sheet recession’, spoke about Japan’s experience. “In the national economy, if someone is saving money or repairing balance sheets, you’d better have someone on the other side borrowing and spending money to keep the economy going. If everybody’s saving money or repairing balance sheets and no one’s borrowing money, then the economy will just collapse. And the private sector has no choice; they have to repair their balance sheets as quickly as possible. Only the government could have come in to borrow that money and spend it—that’s basically fiscal policy.”
In my view, private sector participants – corporates and individuals are at a crossroads. The rapid increase in debt over the past decades is a worry for China. The broad crackdown by the government on the private sector, especially on the property developers, places Chinese consumers and companies in a somewhat similar situation. If their ‘animal spirits’ retreat in the face of falling property prices and weaker economic growth, China’s economy might slip down the same route as Japan’s. Deflation and slower growth with spasmodic growth, driven by stimulus.

As I mentioned at the outset, circumstances are different, and China is not Japan. There are several big differences between now and the 1990s. China’s geopolitical status as a rival to the US was not applicable to Japan. Several Japanese companies exported to the US and global markets, which allowed certain sectors (auto, video games, semiconductors, speciality chemicals etc.) to grow. That avenue is increasingly closing for China.

Another big difference is a managed currency in China compared to a free-floating Japanese yen. In Japan’s case, as deflationary forces intensified, the yen strengthened, reinforcing domestic deflation. Helped by gradually lower commodity prices over the years and a strong currency, real disposable income for individuals rose over the three decades of stagnation. That is not the case today. To counter domestic deflation, China could easily engender a hefty devaluation of the yuan and export deflation onto the world.

Finally, today the world over, debt levels both absolute and relative (to GDP) are staggeringly high, and China is no different. At the start of Japan’s deflationary period, their stimulus expenses and lower-than-expected tax collections led to accumulating debt, but they started from much lower levels. China’s incremental capital output ratio has deteriorated sharply over the past decade. Any stimulus is unlikely to deliver higher GDP growth, and debt as a percentage of GDP will climb further.

With the demographic profile in China indicating the country will age before it gets rich on a per capita basis, our approach to investments in China needs to be calibrated differently as compared to the past. China resembles the ‘Old Japan’. Yet policy decisions by the government will be even more crucial. In an unsettled and volatile world, there is one takeaway for us regarding China – expect much slower growth and possible deflation.

The View From Asia

Conditions in Asia are considerably different to those in the US

The View From Asia

Recession remains a threat, and despite official figures, China is almost certainly in a phase of contraction