The JOHCM International Opportunities Fund is managed by Ben Leyland, senior fund manager, and Robert Lancastle, fund manager, supported by dedicated analyst Jasmeet Munday. The team seeks to generate high risk-adjusted returns with volatility below that of the broad market by focusing on high-quality, cash-flow-generative companies. They blend the best of quality investing with the best of value investing in order to avoid the two major sources of capital destruction at market turning points: overvaluation and overleverage. They prioritize businesses with strong franchises, strong balance sheets and the ability to create shareholder value by reinvesting in areas of competitive advantage, but they only commit capital where they see a favorable risk/reward ratio, i.e., limited downside and substantial upside on a 3- to 5-year horizon. They emphasize absolute rather than relative returns and are prepared to hold up to 20% cash in the fund when valuations are unattractive.

The team aims to deliver above-average risk-adjusted equity returns over the medium term. They believe this is best achieved by investing in a concentrated, unconstrained portfolio of attractively valued compound growth companies. They prioritize companies that are able to reliably generate cash flow and reinvest it at high marginal returns in order to grow their intrinsic value. As a result, the companies become more valuable over time.

The investment objective of the JOHCM International Opportunities Fund is to achieve long-term total return by investing in a concentrated portfolio of international equity securities. The Fund invests, under normal market conditions, primarily in equity securities of companies headquartered outside the U.S., including those in emerging markets. The Fund may invest in foreign companies of any size, including small- and mid-capitalization companies, in order to achieve its objective. Equity securities include common and preferred stocks, rights and warrants. The Fund may also invest in equity related instruments, such as equity linked notes and participation notes, all of which derive their value from equities. Equity linked notes and participation notes will be securitized, freely transferable and the Fund will not be leveraged as a result of investing in them. The portfolio typically contains 25 to 40 stocks,* with position sizes of 2% to 5%. The Fund is benchmarked against the MSCI EAFE Index, but their process is benchmark-agnostic: The team aims to cluster exposure around particularly attractive areas and have zero exposure to overleveraged or overvalued areas of the market. The process is biased toward larger-cap (>$5 billion) multinationals listed in developed markets.
*The number of stocks in the portfolio will be fewer than 50.

An introduction to the JOHCM International Opportunities Fund 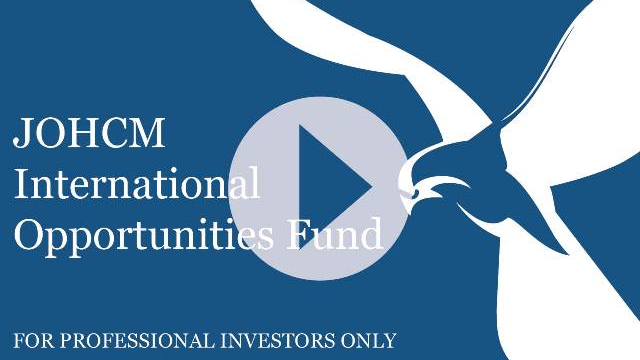 Fund managers Christopher Lees and Nudgem Richyal believe stock markets are inefficient and aim to exploit market anomalies via an investment process that combines both top-down and bottom-up research. Their intuitive “4-Dimensional” investment process (stocks, sectors, countries, time/change) focuses on the be...

The third quarter of 2022 splits neatly into two very different phases. The first half, until mid-August, saw equity markets rally as softening inflation data, helped by a falling oil price, offered hope that a macroeconomic ‘soft landing’ could be achieved, and that the Federal Reserve would be able to stop raising interest rates earlier than expected. US 10-year rates fell from around 3% to just over 2.5%, the VIX fell to below 20, and the MSCI AC World Index rose over 10%, led by the two ‘extremes’: technology/growth (on reduced derating risk) and industrial cyclicals (on reduced earnings risk).

The market narrative changed sharply through August as more inflation data, and statements from the Federal Reserve, including Jerome Powell’s speech at Jackson Hole, made a pivot back to looser monetary policy appear less likely. The US 10-year yield peaked at nearly 4%, a level which had not been seen consistently since 2008. The VIX rose back above 30 and the MSCI AC World Index fell by more than 15%. The decline was initially led by technology but broadened out from mid-September with the best performing sectors, consumer staples and healthcare, falling only marginally less than the worst. Of most relevance to the fund, the utilities and energy sectors were very resilient in the first phase of the selloff but much less so in the second. Stories emanating from the UK defined benefit pension system in reaction to the ‘mini budget’ the prior week highlighted the increasingly technical and liquiditydriven nature of this drawdown.

The fund outperformed the MSCI EAFE NR index, outperforming the first phase of the selloff, and performing broadly in line with the second phase. Much of this relative performance can be explained by our sector positioning, being underweight both cyclical and growth extremes. A number of stocks were notably resilient, including Couche-Tard and most of our financials holdings and at the margin we have been recycling capital out of these into those weaker names. We also initiated positions in Schneider Electric and Heineken, two European-listed businesses with mostly non-European exposure.

An increasingly indiscriminate selloff is uncomfortable to live through, as there are few if any hiding places. But it is also an exciting time to be looking to put capital to work, as the market is getting more inefficient. Intrinsic value has no relevance to a liquidity-driven seller. We have noted the increased competition for capital already this year and our shopping list is getting longer. But with significant risks remaining in both real and financial worlds, it is important to remain vigilant. In our view there is still significant derating risk at the ‘bond proxy’ end of the market. The last time US 10-year yields were near 4%, stocks like Nestle, Coca-Cola and Johnson & Johnson were trading on multiples one third lower than they are today. At the same time, there is clearly plenty of short-term earnings risk in cyclical sectors vulnerable to an overtighteninginduced recession. It will be very important to monitor trends in company guidance during Q3 reporting season. And in the context of potential earnings downgrades and rising interest rates it is critical to monitor balance sheet risk, including any refinancing requirements on short-dated debt: funding costs for BBB corporates are back over 6%. It is time to ‘get greedy, but stay selective’, maintain a quality bias, and continue to focus on long term strategic positioning rather than short term tactics and market timing.

Sources for all data: JOHCM/Bloomberg (unless otherwise stated).

Returns shown, unless otherwise indicated, are total returns, with dividends and income reinvested. Returns for periods of less than one year are not annualized. Fee waivers are in effect; if they had not been in effect performance would have been lower.

The MSCI EAFE Index (Europe, Australasia, Far East) is a free float-adjusted market capitalization index that is designed to measure the equity market performance of developed markets, excluding the US & Canada. Any Indicies mentioned are unmanaged statistical composites of stock market performance. Investing in an index is not possible.

*Expense ratios as stated in the latest prospectus. JOHCM (USA) Inc. has contractually agreed to waive fees and reimburse expenses so that the Net Total Operating Expenses do not exceed the stated amounts until January 28, 2023.

Returns shown, unless otherwise indicated, are total returns, with dividends and income reinvested. Returns for periods of less than one year are not annualized. Fee waivers are in effect; if they had not been in effect performance would have been lower.

The MSCI EAFE Index (Europe, Australasia, Far East) is a free float-adjusted market capitalization index that is designed to measure the equity market performance of developed markets, excluding the US & Canada. Any Indicies mentioned are unmanaged statistical composites of stock market performance. Investing in an index is not possible.

*Expense ratios as stated in the latest prospectus. JOHCM (USA) Inc. has contractually agreed to waive fees and reimburse expenses so that the Net Total Operating Expenses do not exceed the stated amounts until January 28, 2023.

Is your equity portfolio ready for a turn in the investment cycle?

A number of capital cycles are turning. We believe investors need to shift their focus towards sectors which have been overlooked.